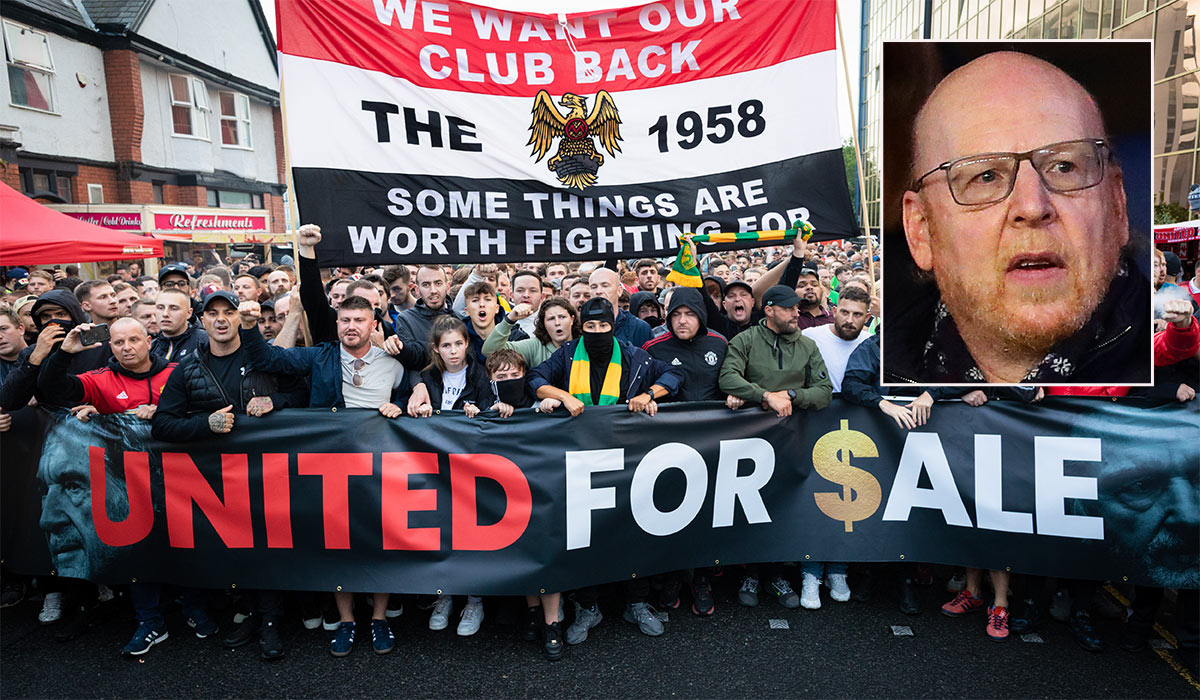 Manchester United announced Tuesday that it would begin an investigation into strategic alternatives, such as a new investment or a potential sale, 17 years after the American Glazer family purchased the English Premier League soccer club.

According to the club, the Glazer family is working with financial advisers on the process, which could result in a partial sale of the Old Trafford club or investments such as stadium and infrastructure redevelopment.

Manchester United fans have been calling for a change in ownership, and the Glazers have come under fire for failing to win a trophy in the last five years. Their most recent trophies were the Europa League and League Cup in 2017.

“As we seek to build on the club’s history of success, the board has authorized a thorough evaluation of strategic alternatives,” United’s executive co-chairmen and directors, Avram Glazer and Joel Glazer, said in a statement.

“We will evaluate all options to ensure that we best serve our fans and that Manchester United capitalizes on the significant growth opportunities available to the club today and in the future,” according to the statement.

According to Reuters, British billionaire Jim Ratcliffe expressed interest in purchasing United in August. Elon Musk had also joked about buying the club at the time.

In recent years, wealthy Asian tycoons, particularly those from China, have purchased European clubs such as Wolverhampton Wanderers of the Premier League and Inter Milan of Italy.

Football clubs, on the other hand, have since been deemed unfavourable assets by China, and any major overseas purchase appears unlikely at the moment, according to Mark Dreyer, the Beijing-based author of “Sporting Superpower,” a book about China’s sports ambitions.

“It’s difficult to see how any Chinese-related entity could justify such a large purchase in the current environment,” he said. “… with China only now confronting the realities of COVID-19, which makes the entire economic environment even more uncertain, no state body would approve this kind of deal.” The owners are under pressure because United is currently fifth in the Premier League, which has been suspended due to the ongoing Qatar World Cup.

Manchester United’s stock increased by up to 20% after Sky News first reported on the sale process, valuing the club at $2.6 billion.

At the end of Tuesday’s trading in the United States, the company was valued at $2.5 billion. In 2018, it had a market capitalisation of $4.3 billion at its peak as a public company.

It was unclear where Ronaldo, 37, would go next after failing to secure a move to a Champions League club in the summer.

“Following discussions with Manchester United, we have mutually agreed to terminate our contract early,” said Ronaldo. “I adore Manchester United and its supporters, and that will never change.” However, it appears that the time has come for me to seek a new challenge.

“I wish the team the best of luck for the rest of the season and in the future.”

Ronaldo, who is currently in Qatar with Portugal attempting to win his country’s first World Cup title, has been frustrated after being reduced to a fringe member of United’s team this season. 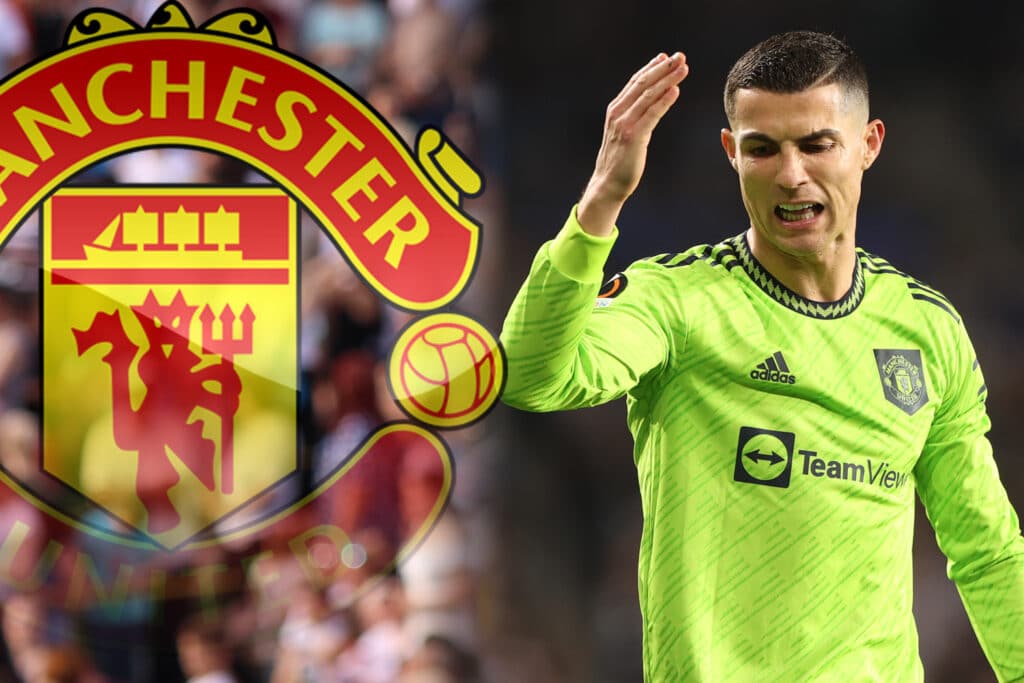 Ronaldo Says He Was Betrayed

During a 90-minute interview with Piers Morgan on Thursday, the Portugal captain said he felt “betrayed,” and he was also critical of younger players.

United announced last week that it had taken appropriate action in response to his comments, with the termination of his contract widely anticipated.

“Cristiano Ronaldo has agreed to leave Manchester United with immediate effect,” the club announced on Tuesday. “The club thanks him for his enormous contribution over two spells at Old Trafford, scoring 145 goals in 346 appearances, and wishes him and his family the best of luck in the future.”

That statement failed to convey the club’s outrage following the unauthorized interview.

Ten Hag had intended to address his offensive issues at the end of the season, but he may now have to look for a replacement during the January window. Three football players were killed and two others were injured in a shooting late Sunday night at the University of Virginia, campus police and university president Jim Ryan confirmed early Monday.

Christopher Darnell Jones Jr., the suspected shooter, was apprehended by police after a 12-hour manhunt that included a campus-wide lockdown.

Jones, a former football player and current UVA student, faces three counts of second-degree murder and three counts of using a handgun in the commission of a felony, according to UVA Police Chief Timothy Longo during a press conference.

According to NPR the university president, the shooting occurred around 10:30 p.m. ET on a charter bus carrying students returning from a field trip to see a play. Officials at the university have not yet released the names of two more victims who are being treated for injuries; one is in critical condition.

Students and faculty stayed put for about 12 hours.

“This is a heartbreaking day for our community,” Ryan said. “This morning, the entire university community is in mourning. My heart breaks for the victims, their families, and everyone who knew and loved them.”

Monday’s classes and extracurricular activities were cancelled, and public transportation to campus was suspended. The surrounding Albemarle County public schools were also closed for the day.

After an extensive search of the grounds, a campus-wide shelter-in-place order was lifted shortly after 10:30 a.m. ET.

According to a press release from the local police department, Jones was apprehended “without incident” in a suburb of Richmond, Va., about 76 miles southeast of the university.

Jones, a university student, was listed as a football player on the university’s athletics website in 2018, but he did not appear in any games.

Longo stated that Jones had previously drawn the attention of campus police due to his involvement in a hazing incident.

Longo said that police closed the investigation after witnesses refused to cooperate, but that Jones had violated a concealed weapons rule while outside of Charlottesville in February 2021.
The Biden administration advocates for stricter gun laws.

On Monday, social media users paid tribute to Chandler, Davis, and Perry. While sharing images and stories of the men, UVA football players and coaches expressed shock, outrage, and heartbreak. 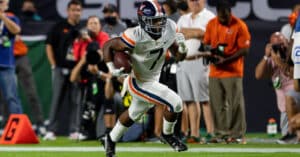 Chandler, according to Jack Hamilton, a UVA professor who said both Chandler and Davis were his students, was described as “an incredibly nice person, always smiling, gregarious and funny One of those people who is difficult not to like.”

Davis went out of his way to make friends with non-athletes and was well-liked by many of his classmates, according to Hamilton.

President Biden’s “deepest condolences” to the “countless families, friends, and neighbours grieving for those killed as well as those injured in this senseless shooting,” according to White House Press Secretary Karine Jean-Pierre.

“We need to enact an assault weapons ban to get weapons of war off America’s streets,” Pierre wrote, referring to a bill that passed the House of Representatives in July but does not appear to have a chance of passing the Senate due to a filibuster.

UVA officials had not yet released information about the type of weapon used in the shooting on Sunday.
This weekend, UVA is at least the second university to report student deaths.

Four University of Idaho students were found dead in a home near the campus on Sunday, according to police in Moscow, Idaho. The deaths are being investigated as suspected homicides by police.

“The Moscow Police Department expresses its heartfelt condolences to family members, friends, and the Moscow community,” the department said in a statement.